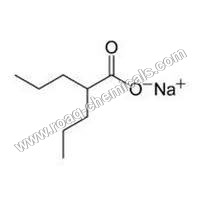 We have carved a niche in this domain by offering top grade Sodium Valproate BP. This valproate is formulated using quality examined chemical compounds by our adroit professionals at our advanced processing unit. Provided valproate is extensively used for the treatment of neurological disorder like epilepsy thus highly demanded in pharmaceutical sector. Our precious customers can buy this Sodium Valproate BP from us at rock bottom prices.

Owing to our vast experience of this domain, we are engaged in the manufacturing and exporting of industry grade Sodium Valproate BP. This chemical is a sodium salt of valproic acid, which is Anti-epileptic and Anti-Convalsant in nature. Further, this drug is used for the treatment of generalized epilepsy, in accordance to the seizure patterns. The offered Sodium Valproate BP is formulated precisely in our well equipped firm by our team of dextrous professionals in proper hygienic conditions.

Pharmacodynamic properties: The exact mode of action is still uncertain but the most likely mode of action is the potentiation of the inhibitory action of gamma amino butyric acid (GABA) through an action on the further synthesis or further metabolism of GABA.

It is also indicated for partial epilepsy: